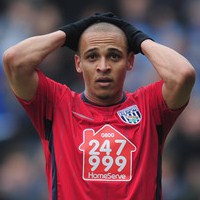 West Brom striker Peter Odemwingie says he has been told not to return training at The Hawthorns until next week.

The 31-year-old tried to force a move to QPR on transfer deadline day.
Odemwingie arrived at Loftus Road but West Brom said no fee had been agreed and he was not free to discuss personal terms.

Speaking outside the West Brom training ground on Friday, Odemwingie said: “I have been given a few days off and will be back in training next week.”
However, although Odemwingie regrets his actions in travelling to London, he insists his long-term future remains away from The Hawthorns.

“I am a very emotional person who sometimes doesn’t think,” he told Sky Sports News on Friday.
“I will still leave the club. It is only a matter of time.”
Baggies chairman Jeremy Peace accused Odemwingie of acting unprofessionally over the apparent attempt to open talks without the club’s permission.

But although Odemwingie admitted he was perhaps a “little unprofessional” he defended himself by claiming the circumstances were not so different to when he joined West Brom from Lokomotiv Moscow in 2010 for £2.5m.