Arsenal boss Arsene Wenger has admitted that he would love to sign Liverpool striker Luis Suarez. 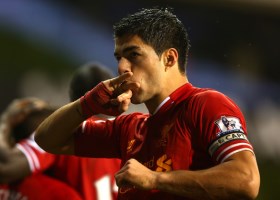 The Gunners failed with a controversial £40,000,001 bid for the Uruguay international last summer.

“I think that every defender in England hates playing against him,” Wenger told Telefoot.

“He has a strong, provocative personality. From the information I gathered on him it appears that on a day-to-day level he is really easy to work with.

“Also that he’s respectful, he loves training, he’s an angel. He turns into a demon when he’s on the pitch.