We are Humbled by Munich tragedy – Giggs 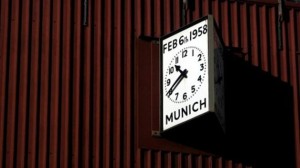 We are Humbled by Munich
United’s current players, including new striker Robin van Persie, recently watched a DVD about the crash, in which 23 people died as the squad, supporters and journalists returned from a European Cup match in Belgrade.
Eight players and three members of the United staff were among those who died after their plane crashed as it tried to take off following a refuelling stop in Munich.

“New players, especially the foreign players, are joining a club which they think is great and offers them everything that comes from United being successful over the last 10 to 15 years,” Giggs told the club’s website.

“We all watched a DVD about Munich recently. It was really important for the squad to watch that and learn about what happened. Not only about the crash itself but also the success they had before it and how the team moved forward in the aftermath, from winning the next game to winning the European Cup 10 years later. Everyone was moved.”

The Premier League leaders also listened to a talk by Bobby Charlton, who survived the crash along with manager Matt Busby, who had to quickly rebuild a team amid the grief.
“I think it’s very important to know how the Busby Babes played and how successful they were before the air disaster and to know how Sir Matt built another great team,” added the 39-year-old Giggs, who has been at United since 1987.

“There are so many things that are relevant to us today and we need to carry on their legacy. For example, fans want to see young players coming through and doing well which they do on a regular basis at this club, and both as individuals and as a team, we have to play in the right manner.”

February 6th will forever be circled on the calendars of everyone connected with Manchester United.

On that day in 1958, the darkest day in United’s history, 23 people – including eight players and three members of the club’s staff – suffered fatal injuries in the Munich air crash.

Flying back from a European Cup tie against Red Star Belgrade, the team plane stopped in Germany to refuel. The first two attempts to take off from Munich airport were aborted; following a third attempt, the plane crashed.

Twenty-one of the people on board died instantly. Aeroplane captain Kenneth Rayment died a few weeks later from the injuries he sustained while Duncan Edwards – one of the eight victims from the team – passed away 15 days after the crash. The tragedy is an indelible part of United’s history, as is Sir Matt Busby overcoming his injuries to build another great team which won the European Cup 10 years later.