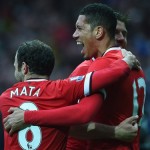 It has been reported that Manchester United defender Chris Smalling hailed the manner of their 4-2 win over Manchester City.

Smalling acknowledged the Reds took control after a slow start and were worthy winners in a first triumph over City since 2012.

“We weren’t ourselves in first 15 minutes, but we dominated from there on,” he told MUTV.

“We came in at half-time and Giggsy said it was a good show of character to come back from a goal down, but in the second half we needed to get the ball down and take a few more risks.

“We were a bit cautious and didn’t try to play out [from the back] too much, but in the second half we really kicked on and made a print on the game.

“It’s massive [to win six in a row]. I think a lot of people probably saw our fixtures as the hardest of the lot, but if you play teams like Tottenham and Liverpool and win, they’re real six-pointers. It makes a massive difference, and I think confidence comes from beating these top teams.” Morgan Schneiderlin Will Be Important For Man Utd – Denis Irwin