Hull City boss Steve Bruce says the key in today’s FA Cup final is not to concede early against Arsenal. 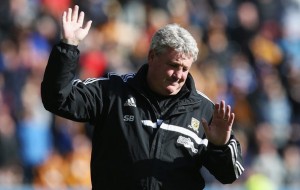 Switches between 3-5-2 and 4-4-2 over recent weeks ensure it remains unclear which shape the City boss will favour, but the emphasis will be on frustrating Arsenal.

“We have to come up with a game plan to stay with them to start with,” said Bruce.

“We’ve got to make it difficult for them. There’s no disputing the fact they’ve got better players than us. They’re the mighty Arsenal.

“So we’ve got to come up with something which can unhinge them, and the longer we stay in it the better.

“If the scores are level with an hour played then the game is in the balance.

“We have to make sure we’re still in with a shout of winning the game.”