It has been revealed that Arsene Wenger dubbed his Arsenal team ‘light metal’ after victory at Champions League opponents Borussia Dortmund. 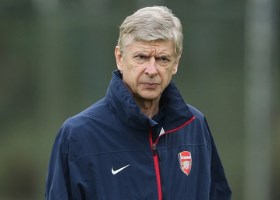 All the pre-match hype had been over Jurgen Klopp’s “heavy metal” approach looking to again overcome Wenger’s Arsenal “orchestra” as they had at the Emirates Stadium a fortnight ago.

Welsh international Aaron Ramsey nodded home a knockdown from Olivier Giroud on 62 minutes for the only goal of the game.

The Frenchman said: “We were light metal.

“This is a huge result.

“We had a united, focused performance, especially defensively.

“We had a lot of possession, but it was a bit sterile possession in the first half because we could not create chances.

“It was a question of being focused and intelligent, and not to make the first mistake, to wait for the moment where we could create openings in their defence. We did that.

“We had a difficult period at start of second half, but after we scored I felt we could have scored a second goal and we were less under pressure. Overall it’s a huge win here.

“If you look at the results they have made at home in the Champions League, not many teams have achieved that.” Arsenal, Liverpool To Do Battle For Lorient Defender Raphael Guerreiro