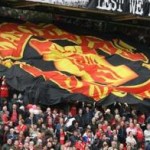 Sickened by the huge amount of debt the Glazers’ took on to complete their controversial takeover in 2005, the Red Knights are intent on launching a takeover bid.

Described as a group of “high net worth individuals”, the Red Knights include Jim O’Neill, chief economist at Goldman Sachs and a one-time friend of Sir Alex Ferguson.

Although plans are at a very early stage and no contact has been made with the Glazers, who have always stressed they are not interested in a deal, a meeting in London on Monday between the key individuals involved in the Red Knights project went through various scenarios and will now look at formulating a plan to raise in excess of £1 billion. (yes..BILLION)

“We can confirm that a group of high net worth individuals, who support Manchester United (known as the “Red Knights”), met in London yesterday,” a statement released on behalf of the Red Knights read.

“This group is supportive of current management but are looking at the feasibility of putting together a proposal to be put to the Glazer family regarding the ownership of Manchester United. These discussions are in early stages and no contact has been made with the Glazer family.”