Reports have emerged claiming that Arsenal striker Danny Welbeck admits it was a tricky assignment for he and his teammates to take on Barcelona. 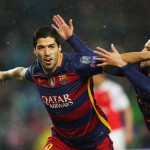 The Gunners were brushed aside 3-1 in the the Champions League at the Round of 16 second leg at Camp Nou on Wednesday night with Neymar, Luis Suarez and Lionel Messi among the goals.

In the wake of the defeat, which saw Arsenal eliminated 5-1 on aggregate, Welbeck accepted that competing with some of the world’s elite professionals was an arduous task for the North Londoners.

“It is difficult,” he admitted.

“They are the best players in the world, to come here and play it is great opportunity and we didn’t give up. We would have liked to have done better but it might have been different in certain situations.

“We came and did the best we could but it is disappointing.

“They were clinical with their finishing. I think that was the difference.”

Mohamed Elneny Urging Arsenal To Focus On The Premier League