It has been reported that Almeria winger Wellington Silva hopes he can soon kickstart his Arsenal career. 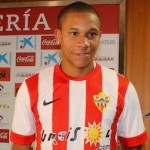 The Brazilian winger, who has been labelled the next Neymar, has been unable to play for Arsene Wenger’s side since his £3.5million move from Figueirense in 2009 due to work permit issues.

However, Silva’s time spent on loan at Spanish clubs Alcoyano, Ponferradina, Real Murcia and Almeria mean he will now be eligible to play in the UK.

“It’s true,” the 21-year-old told reporters when questioned about his Spanish citizenship.

“I can now go back to Arsenal from next season. I would be very happy if I could become an idol at a club like Arsenal.

“I will give my best to become a great player.” Arsenal, Liverpool To Do Battle For PSG Attacker Ezequiel Lavezzi