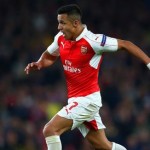 The Chilean forward pushed himself to the point of exhaustion in the Gunners’ 2-0 Champions League win at the Emirates Stadium and has to be replaced late in the piece by Kieran Gibbs.

Sanchez put in two stellar 90-minute performances for Chile in World Cup qualifiers against Brazil and Peru over the international week before coming out of Saturday’s 3-0 win at Watford with 10 minutes remaining and Wenger feels that perhaps the former Barcelona man has put himself through plenty of work over the past few weeks.

“Alexis, you could see he was a bit jaded physically tonight and he still pushes himself so much but he finished exhausted,” said the Frenchman.

“The two games with Chile, plus travelling, plus Watford, plus tonight, it is too much.”

It will be interesting to see what sort of role Sanchez plays when Arsenal host Everton in the Premier League on Saturday.