Reports are out claiming that Arsene Wenger admits his Arsenal team were beaten by a more physical Everton outfit on Tuesday night. 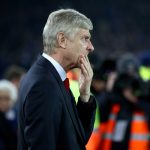 The Gunners took a 20th-minute lead through Alexis Sanchez before the Toffees fought back with goals from Seamus Coleman and Ashley Williams to win 2-1 at Goodison Park.

Wenger believes Arsenal had the chances to win the contest but were unable to convert and in the end succumbed to a fighting Ronald Koeman side.

“It was a very physical game,” he said.

“We faced many physical challenges and that disturbed our game but we were a bit unlucky to lose as well.

“We had chances in the first half, especially from Mesut (Ozil). They defended well, they played a cup game, and at the end of the day it was two defenders in their team who scored.

“They were a bit scared at first but they got their confidence. We did fight, I cannot fault that.”

He added: “Unfortunately we didn’t take our chances. We didn’t create many but we had clear-cut chances we didn’t make the most of.” Arsenal, Anderlecht To Do Battle For Victor Osimhen