It has been reported that Arsenal boss Arsene Wenger admits they were following Manchester United signing Anthony Martial. 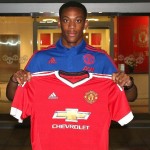 Martial, 19, joined the Red Devils on transfer deadline day from Monaco for a jaw-dropping fee of £36m.

“We [have] known him since he was a kid,” Wenger said.

“But he’s more of a winger-type.

“He’s an exceptional talent I agree with you but I believe that he plays in positions where we have players like Alex Oxlade-Chamberlain, Alexis Sanchez and Joel Campbell who can play in the position.”
–