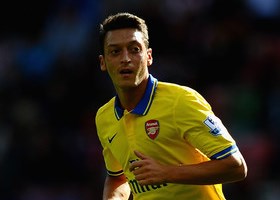 It has been reported that Arsenal boss Arsene Wenger is happy to liken Mesut Ozil to Gunners legend Dennis Bergkamp.

“Yes, he is a similar type,” Wenger said.

“Dennis was maybe more prolific. Dennis was first a striker but he created as well. But Dennis’s evolution through his career was an adaptation to his physical qualities. When he couldn’t score any more he became a great provider.