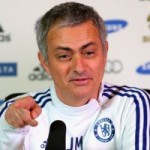 Mourinho took a dig at Arsenal’s Arsene Wenger over the Frenchman’s statement that it was “unfair” for Chelsea to sell Juan Mata to Man Utd.

“Wenger complaining is normal because he always does. It’s something we know,” Mourinho told reporters.

“If Wenger sold [Mesut] Ozil to Man United I would be very happy because they lose a good player, but Wenger will complain and say it’s not fair.

“When he says this is not fair I think what’s not fair is his team always has the best days to play.

“When you go to the fixtures during the season, it’s never fair because [Arsenal] always get the right times to play, to rest.”