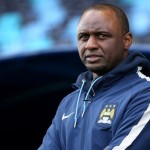 Manchester City coach Patrick Vieira has revealed that he wanted to join Arsenal’s staff, but was rejected by manager Arsene Wenger.

Vieira is currently managing Manchester City’s reserve side and admits he was hurt when Wenger did not approach him about returning to the Gunners when he retired in 2011.

“Had he wanted me to work alongside him, he would have asked me,” he said.

“Both the club and Arsene have behaved disappointingly towards me. Everywhere I go people ask me why Arsene didn’t give me the chance to work with him.

“It was out of the question to offer my services. Why would I have done it? When I stopped playing I had an offer from City, and I did not get any phone calls from Arsene.

“I gave Arsenal a great deal, just as the club and Arsene gave me a lot.”