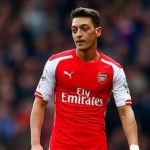 Reports are out claiming that Arsenal boss Arsene Wenger was delighted with Mesut Ozil’s performance in victory over Liverpool.

The former Real Madrid star scored in the 4-1 win.

“What he does is always classy, intelligent and the timing of his passes is absolutely fantastic. He’s agile, flexible and always available in between the lines,” said Wenger.

“When you play with him in the team, you would love to play with him. He’s sometimes criticised because of his physical challenges but I believe he’s on the way and is improving on that at the moment. He makes a big effort to work hard and be disciplined for the team.”