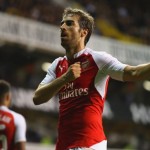 It has been reported that Mikel Arteta and Mathieu Flamini have been ruled out of Arsenal’s Champions League clash with Olympiakos on Tuesday.

Gunners boss Arsene Wenger said: “They are not big injuries to Mikel and Mathieu – it’s a question of days.

“It’s the games before that could influence my selection. Some players played two tough games, physically, against Tottenham and Leicester.

“We’ll have to analyse that on Monday and make my decisions. I believe that the 20 fit players I have available will make a strong team.”