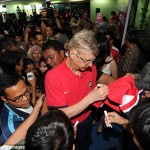 Arsène Wenger says he has begun new contract talks with Arsenal and is “committed to staying” at the club beyond next summer, when his current agreement is set to expire.

The Frenchman has been a target for Paris St-Germain, whose managerial appointment of Laurent Blanc on a two-year deal has failed to stop speculation that they may move for Wenger at the end of next season, were he not to renew at Arsenal. The prospect of another rumbling contract saga at the Emirates Stadium stands to be unsettling.

However, Wenger played down the link to PSG as he talked up his passion for Arsenal, his employer of 17 years. “The link is because I’m French and I know the owners,” he said. “But if that was the case, then I would be there already. My heart is with Arsenal. I am committed to staying longer at this club. We had already a chat with Ivan [Gazidis, the chief executive]. It went very well … not a problem.”

Gazidis has made it clear he sees Wenger as the man to lead Arsenal into the longer term; to oversee the club’s new-found spending power in the transfer market, as bigger commercial deals come to fruition.

But Wenger said he would base the decision on whether to re-sign on performance and added he would not take anything for granted. He is under pressure to win a first trophy since 2005 and admitted this was “an important season for me”.

“I am like everybody else … of course, it is important to see how well we do,” Wenger said from Indonesia, where Arsenal have embarked upon the first leg of their pre-season tour. “What I will always do in the future is not to use my longevity as an advantage to stay in this position if I don’t do well.” Ross Barkley Struggling To Be Fit For Arsenal Clash