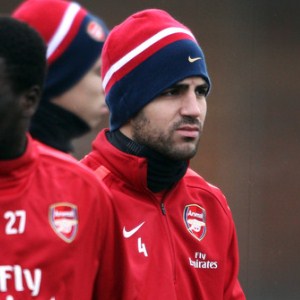 Arsene Wenger has revealed that he sees skipper Cesc Fabregas as a future Spain captain.

After Saturday’s 3-0 win, the Arsenal manager was asked to identify the Spain international’s attributes.

Wenger told arsenal.com : “His character. [He is] strong, strong mentally. And his intelligence,”.

“He understands very quickly and he has a huge desire to win. He is ready to die to win. When a guy turns up at 16 or 17 and everybody gives him the ball, he has some natural charisma. I believe he will be an outstanding leader and he will lead the national team in Spain without any problem.

“At 16, he was shy. I do not believe in being a born leader but you can see that the qualities are there or someone can develop into a leader. You learn that. Overall, one of the leaderships he has is on the football pitch – that strengthens your belief he can lead the team.

“What people forget he is 23 years old. I have been 23. What he does on the football pitch at that age, as a leader, is absolutely fantastic.”