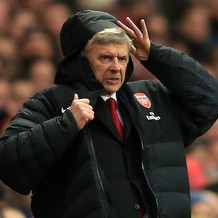 Arsenal are facing a gruelling fixture list of seven games in 21 days should they win their FA Cup third-round replay against Swansea a week on Wednesday.

It includes Premier League clashes against Manchester City, Chelsea and Liverpool.
Arsene Wenger yesterday admitted: ‘I am frustrated because I don’t want a replay, but if that’s the choice between going out or staying in the hat, I’ll take the replay.’

He also praised his current batch of stars for battling back from a goal down, to go within three minutes of a win.

Wenger said: ‘We showed heart and it’s quite good if we can repeat that because we kept going.’ He also felt his side were denied a penalty when Aaron Ramsey fell in the box under pressure from Dwight Tiendalli in the 52nd minute.
‘It was a penalty and the ref saw it. He didn’t give it as he thought the guy didn’t do it on purpose,’ said Wenger.
‘It was accidental, but Ramsey didn’t trip himself. He was caught clearly by the leg of the Swansea player. The ref had a hesitation. In the end, he didn’t give it. I didn’t speak to him. The problem is we could’ve had a penalty but that can happen. We’ve shown good resources and mental quality.’