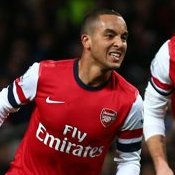 Arsenal are ready to stretch their rigid pay structure to push through a new deal for Theo Walcott, which could be signed ahead of this weekend’s Barclays Premier League clash with Manchester City.
The Gunners are ready to make Walcott among the highest-paid players at the club with a five-year contract worth around £90,000 a week, which would be boosted by lucrative add-ons.

Manager Arsene Wenger spoke in length about the “socialist” pay structure within the Arsenal dressing room ahead of the FA Cup tie at Swansea, revealing there was a general consensus to keep pay disparity to a minimum, unlike many of their top-flight rivals.

Wenger, though, has stressed the need to keep Walcott on board at the Emirates Stadium, with the player having already rejected one contract offer earlier in the season, but now both parties would appear close to reaching an agreement.

Walcott had also expressed a desire to be deployed more in his preferred central striker role, in which he has revelled during recent weeks, crashing in a hat-trick in the 7-3 win over Newcastle.

While Wenger indicated signing up the 23-year-old England forward was his main priority during the January transfer window, Arsenal are still expected to bring in more additions as they look to break back into the top four of the Premier League and tackle Bayern Munich for a place in the quarter-finals of the Champions League.