Reports are out claiming that Arsenal boss Arsene Wenger says he doesn’t need a new striker after their 6-0 Emirates Cup win over Lyon. 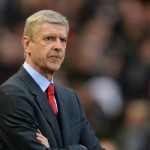 Olivier Giroud, Alex Oxlade-Chamberlain, Alex Iwobi, Aaron Ramsey, Mesut Ozil and Santi Cazorla were on the scoresheet as the Gunners coasted to victory.

“We are open-minded but we are not desperate. Today we didn’t have (Danny) Welbeck or (Alexis) Sanchez, who are big players,” he said.

“(Jack) Wilshere didn’t play as well, so we will have a good squad when everyone is back. We are open-minded but many clubs are on the market with big, big money.

“At the moment our squad is well-balanced quality-wise and numbers-wise.

“When you win the FA Cup final scoring four goals and score six today, it shows scoring goals is not our problem.”