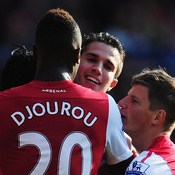 Arsenal boss Arsene Wenger said he didn’t even know if last night’s match-winner, Robin van Persie, would make it for the clash with Stoke City.

The Gunners skipper was the hero last week with two stunning goals to help beat Sunderland 2-1 and today was at it again at the Emirates with a brace in the 3-1 victory over Stoke City.

Prior to the match, the Dutch international was in doubt with Wenger admitting he was not sure if he would play but was delighted the Dutchman was able to come on and contribute, along with Gervinho’s opener, to send the Gunners to seventh.

“The second half was basically all us, especially after the first 15 minutes, and then the problem was to score goals and Van Persie can do that better than many people, and he did it when he came on,” Wenger said.

“He had muscular tightness, I was not even sure he would be on the team sheet but we checked him this morning and he was medically all right to be on the bench.

“Before you leave him out you think always 15 times ‘do I really do it’ but I felt at some stage, and looking at the number of games he has played and with his history, you have to be cautious.

“He played two full games with Holland and the whole game against Sunderland, he played up front alone in Marseille, so at some stage you have to give them a breather, but up front it’s difficult.

“Of course Robin, with his two goals, deserves massive credit but I think Gervinho had a very lively and influential game as well.” Theo Walcott Pleased To Get Off The Mark For Arsenal