Reports are out claiming that Arsenal manager Arsene Wenger was full of praise for the mentality shown by his players in the 1-1 draw against Tottenham. 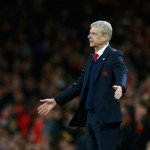 The Gunners came from behind in the second half at Emirates Stadium to secure a draw against their bitter rivals, thanks to a goal from Kieran Gibbs.

“We were a bit on the ropes and we responded,” Wenger said after the game.

“Every time we have a disappointment I feel we respond well in the game after. When you look at the results again today you see Villa-City was 0-0, Liverpool lost and we played 1-1.

“It just shows you that the championship will be extremely difficult for everybody.

“The mental qualities can have a big influence in the future and I think we need these qualities.”