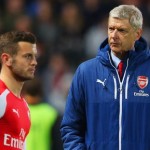 Tottenham manager Mauricio Pochettino says he needs up to five signings this summer, but Wenger is not planning such drastic business.

“You want me to beat him?! I don’t think it’s the numbers we need,” the Arsenal manager said. “We have a squad of top quality and if we can strengthen our squad then of course we’ll do it.

“Let’s finish the season well, focus on doing well together until the end and then see who can reinforce our squad.”