Reports are out claiming that Arsenal manager Arsene Wenger insists his side will play to win in their Champions League clash with Bayern Munich at the Allianz Arena on Wednesday night. 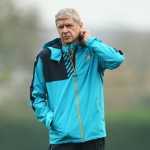 Despite Wenger admitting earlier in the week he would happily sign-up for a draw on the road against the German Champions, the Frenchman was adamant the Premier League club would be looking to secure three points once the opening whistle is blown.

“I don’t think it is easy to look for a draw,” Wenger said.

“What we want is to play to win. When you are Arsenal and we have won everywhere in Europe, even here, we will try to win the game. Are Bayern a great team? Yes. But it is a good challenge for us to compete with them.

“We are in a period where we are doing well and that should convince the players we can do something right. We have a good togetherness and I believe we are a team that stick together when things don’t go well.”