Reports have emerged claiming that Arsenal boss Arsene Wenger is happy with the make-up of his squad. 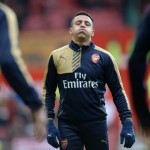 Arsenal recorded £193 million of cash reserves in September, have no need to sell and can now attract stars such as Alexis Sanchez and Petr Cech.

“This is a team that’s very hungry,” said Wenger. “They want to win and I think they’ve shown that in the FA Cup in the last two years.

“This team wants to do well and is very conscientious and my job is more to relax them a little bit. They do not look at what happened five years ago, they look at what is in front of them. It’s certainly top, spirit-wise.”