Reports are out claiming that Arsene Wenger believes Arsenal’s 2-1 come-from-behind win over Leicester City on Sunday has strengthened their title belief. 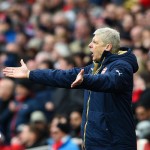 The Gunners scored late goals through Theo Walcott and Danny Welbeck to see off the ten-man Foxes at the Emirates Stadium, allowing them go within two points of the Premier League leaders.

After the match, Wenger touched on the magnitude of the triumph which places the North London club in a strong position to win a first league title since 2004.

“It keeps us in it, with many other teams so let’s see,” he said.

“We came out of a bad spell with four games without a win but now we’ve won two games on the bounce.

“After that bad spell, still being in with a chance, is a good result. Hopefully, the result today strengthens belief in the team that we have a chance.”