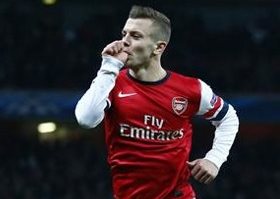 The Frenchman insisted Ramsey’s 13-goal haul this season has motivated his fellow midfielder.

“I have nothing against Wilshere scoring – if I’m wrong I’m happy! I liked his first goal because before he’d rush a little bit,” the Arsenal manager said.

“He’s starting to think ‘what Ramsey can do, I can do as well’, the first goal shows that.

“What Ramsey has done puts in Jack’s mind that he has to score as well. If you’re a midfielder you want to score goals.”