Reports are out claiming that Arsenal striker Olivier Giroud says he never panicked over his lack of goals earlier this season. 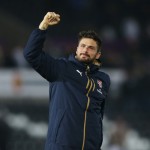 The French international believes Arsene Wenger to take him out of the firing line following his recent struggles on international duty helped him come back stronger.

“He chose to put me on the bench when I came back from Bordeaux [where he played against Serbia]. Maybe he thought I needed to be less under pressure,” Giroud told Le Parisien.

“We spoke about it. He told me he trusted me, like he did Theo Walcott, but that we were two different players. It was also a tactical choice.”

He added: “I understood the coach’s tactical choice, but after four games, I needed to turn things around.

“I told myself: ‘I can’t let this last’. It wasn’t good for me, for the national team or for the Euros. I didn’t want to spend the whole season on the bench. It made me react.”