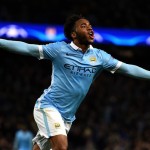 Reports are out claiming that Arsenal boss Arsene Wenger regrets not signing Manchester City midfielder Raheem Sterling as a teenager.

“We had many players on the flanks, but Sterling was at QPR – that’s where we should take the players,” he said as Arsenal get ready to tend to the 21-year-old at close quarters tomorrow night at the Emirates.

“We watched him but you miss obvious players. The history of every club is full of top players that you missed. At the time Liverpool were quicker.”