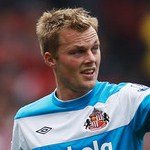 The Arsenal boss saw the former Gunner find the net with a stunning strike at the Emirates Stadium, curling home from 25 yards after Mikel Arteta’s handball.

The goal was Larsson’s third for the club since joining on a free transfer in the summer having scored 21 goals in just over five years at Birmingham City.

However, Arsenal took the points in North London thanks to two goals from Robin Van Persie, and Wenger believes the pair are similarly deadly when it comes to set-pieces.

“Yes [Van Persie is] among the best [at set pieces] in the league, with Sebastian Larsson,” he told arsenal.com.

“I think Larsson is maybe the best free-kick taker in the league.”