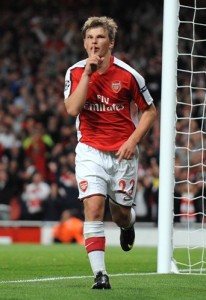 Arsene Wenger has revealed that he believes Russian international midfielder Andrey Arshavin can become a legend at Arsenal.

The Emirates chief reckons the Russian ace has what it takes to guide the Gunners to glory as the talented midfielder previously led Zenit St Petersburg to the Russian title and UEFA Cup win.

Wenger added that Arshavin looks like he is a shrewd street player because he always creates something in unexpected situations.

The manager added that this the real challenge Arshavin faces and that he is convinced Arshavin has all the potential to do it as he is a natural leader and a character.

Wenger also said that Arshavin has something specific to him that he uses very well as he possesses a low centre of gravity, great pace and tricky dribble.

Wenger went on to say that Arshavin uses all that he has in the locker in an intelligent way and not to forget that Arshavin is a winner as well.