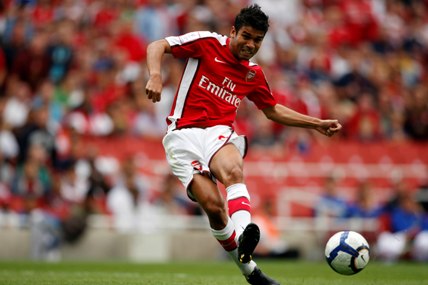 Arsenal manager Arsene Wenger has said that he believes this current Premier League season will be a “massive season” for Croatia international striker Eduardo.

Following the best part of a year out of the game after an horrific leg injury suffered at Birmingham in February 2008, Eduardo opened his account for the new campaign in the 6-1 Barclays Premier League win at Everton on the opening day.

Wenger said that Eduardo was one of the players Arsenal missed terribly because of his ability to score goals and provide. Wenger also went on to say that it is a massive season for Eduardo as he was out for such a long time and he could not prove what a big player he is.

The centre-forward looks set for a start in Wednesday night’s Champions League qualifier second leg against Celtic, with the Gunners boss ready to rest Robin van Persie. Wenger added that in the first season for the first six months, Eduardo did not play a lot and when he came in and showed his class, he got injured and lost a whole season.

Wenger admitted he was relieved to see the forward back in action and said that Eduardo is in the third season with Arsenal, without having the opportunity until now to prove how good he is.

Wenger also said that he had doubts about Eduardo’s injuries at first and that only fools would say they had no doubt but Eduardo has shown his strength of character and now there are no doubts any more about him because he is completely a normal player. Kurt Zouma Thrilled With Goal In Victory Over Arsenal