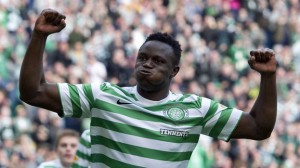 According to Arsenal News, Celtic value Victor Wanyama at £10 million, and Arsenal must out-bid other premier league powerhouses among them Manchester United if they are to sign the Kenyan international.

Manchester United coach Sir Alex Ferguson has been a great admirer of the Kenyan and on several occasion has sent United’s chief European scout Martin Ferguson to watch the player. Andre Santos : I Am Happy At Arsenal!