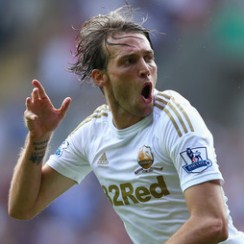 Michu is emerging as a contender to become Arsenal’s new attacking spearhead, despite Arsene Wenger’s admission that he is interested in Wayne Rooney.

The Gunners manager has put a new first-choice centre-forward at the top of his summer shopping list, with Gonzalo Higuain, Stevan Jovetic and Rooney all high on it.

But DailyMail reports that a shock move for Swansea’s prolific striker has been discussed by Wenger and his scouting team.

His impressive displays at the start of last season prompted Arsenal into an extensive scouting mission on the 27-year-old.

And Arsenal, who are also set to sign Michu’s team-mate Ashley Williams, have a concrete interest in the striker.

The club, who also retain a long-term interest in Real Madrid striker Karim Benzema and Manchester City striker Edin Dzeko, are exploring numerous striking options ahead of next season as they look to land a new world-class centre-forward.