Wenger: We Can get Champions League Spot without Wilshere and Walcott Arsene Wenger has said he believes his team can still qualify for the Champions League despite seeing both Jack Wilshere and Theo Walcott ruled out with injury. 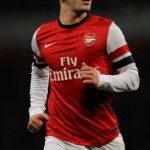 Wilshere is expected to miss another two weeks with the ankle injury while Walcott will also miss the visit of relegation-battling Reading this weekend after he injured his pelvic muscle while on international duty.

But Wenger was upbeat over Arsenal’s chances of finishing in the top four this season, with the Gunners facing West Brom and Norwich after hosting the Royals.

“Regarding Jack? I think two weeks on Sunday,” Wenger told reporters. “Not the next game, but the game after.”

“Walcott is an accident that could have happened here.

“I have no conversation with the England manager. He uses the players how he wants to use them.”

“We’ve got nine games to go, five at home and four away,” continued Wenger.

“The form we showed against Bayern was very good. We have a chance to finish in the top four.

“We have the experience of a few years and a special desire to do it together. It’s a good opportunity for us. We want to grab this chance. If we are consistent we will do it. We’re not focused on Tottenham, but the way we want to play.”