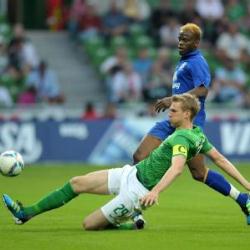 Everton’s pre-season trip to Germany ended in defeat after they lost 1-0 to Werder Bremen.

The Bundesliga side won thanks to a Sandro Wagner strike – the only goal of a low-key game at the Weserstadion.

David Moyes’ side started brightly, with youngster Ross Barkley a threat on the right flank, but fell behind eight minutes before the break, Wagner crashing home a header from close range.

The Toffees were almost immediately back on terms, Sylvain Distin heading narrowly over (44) before a raft of half-time changes disrupted the flow of the match.

And the visitors were ultimately lucky to only go down by a single goal as Markus Rosenburg fired a glorious chance wide late on.