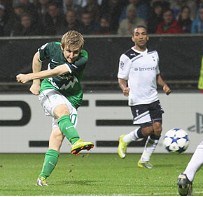 Tottenham look set for a rollercoaster first season of Champions League football after surviving another topsy-turvy night on the continent.

In what was almost a mirror image of their play-off round first leg at Young Boys, Spurs romped into a two-goal lead at Werder Bremen and could easily have been three or four up before half-time.

But a suicidal four-minute spell either side of the restart turned their Group A clash on its head and they could have easily returned to London empty-handed.

In the end, a draw was just about what both sides deserved as Spurs learnt another valuable lesson about the harsh realities of Champions League football.