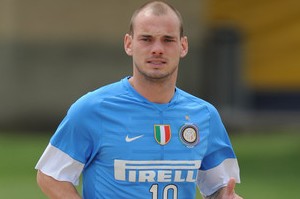 Real offloaded Sneijder last August only to see him lead Inter to the Champions League Final, which will be held in their own ground.

To make matters even worse for Los Blancos, another of their ‘rejects’, Arjen Robben, has inspired Bayern Munich to the Final too.

“It’s wonderful to return to this stadium,” Sneijder said before being asked to comment on Robben.

“Arjen is strong, but he is not the only important player.

“I expect a great final. Inter and Bayern are two strong teams. They have shown it during the Champions League. It will be a difficult game.”

Cristiano Ronaldo : I Appreciate The Love From The Bernabeu