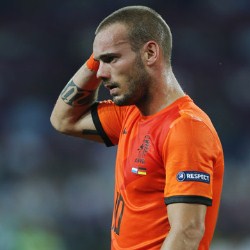 It has been revealed that Wesley Sneijder has told Inter Milan president Massimo Moratti to move for Manchester City midfielder Nigel De Jong.

Sneijder claim that De Jong would be a great signing for the Nerazzurri.

“Moratti must sign De Jong. He’s football mad! I know him well,” laughed Sneijder, who was also asked about interest from Anzhi.

He told Corriere dello Sport: “Three or four years ago I would think about it. Now I do not: it is more important to play in a big competition and aim for trophies.”