It has been reported that Wesley Sneijder has again rejected claims that he is set to join Manchester United this winter. 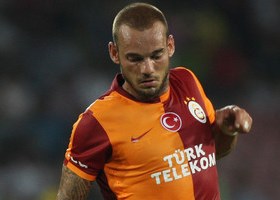 The Dutch international is continually linked with the Red Devils but after sending Galatasaray through to the Champions League Round of 16 with a late goal against Juventus on Wednesday, the former Ajax, Real Madrid and Inter Milan man says he is happy in Istanbul.

The 29 year old told NOS : “I know just as much as you. I don’t even read the newspapers, but I’ve heard about the reports. At the moment it isn’t an issue, but every time the transfer window is open, I get linked with all kind of clubs,”.

“Sometimes it’s frustrating, because I have to clarify it with the fans. Here in Turkey, the supporters are very emotional. They have a lot of passion and I don’t want to explain things that I don’t know about.

“Again, I know just as much as you do. I feel very good at Gala, and I’m glad we’re through in the Champions League. You’ll never know, but at this point I’m happy here.”