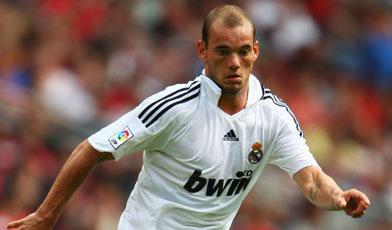 Interesting transfer news are out and it has been reported that Real Madrid midfielder Wesley Sneijder will turn his back on a move to Aston Villa and the Premier League in favour of staying with Real Madrid.

The Dutch international playmaker was linked with a £20million switch to Martin O’Neill’s side after falling down the pecking order at the Bernabeu.

And the Spaniards have also splashed nearly £200million on the likes of Cristiano Ronaldo, Kaka and Xabi Alonso this summer hence making Sneijder an unlikely starter next season.

However the 25-year-old insists that he is in no rush to leave Madrid and has vowed to fight for a place in their star-studded team.

Sneijder said to reporters that he wants to fight for a place at Real Madrid despite there being a lot of rivalry.

He also added that he does not want to leave Real Madrid. Sneijder also said that he knows the transfer market is open for another two weeks but he will not change his mind.