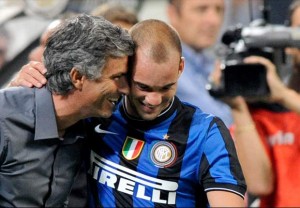 Wesley Sneijder had one of the best seasons of his professional career during Mourinho’s time at Inter Milan and it comes as no surprise that the Dutch international is being linked with a possible move to Chelsea this summer.

The Sun says the Galatasaray playmaker is set to move to Chelsea according to reports in Turkey.

It is just five months since the Dutchman, 28, arrived from Inter Milan for £7million on a 3½-year deal.

But Sneijder has struggled under boss Fatih Terim and the Turkish club will listen to a ‘reasonable’ offer.

Sneijder certainly sees the chance to team up again with Jose Mourinho as an ideal escape route.