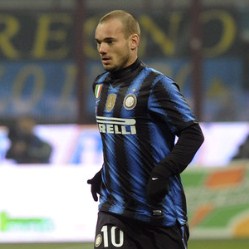 Sensational news are out and it has been revealed that Wesley Sneijder is attempting to resurrect his deal with Manchester United.

The Sun has reported that the worried Inter Milan midfielder, 27, looked to have blown his chance of leaving Inter Milan by asking for £200,000 a week.

It is said that the Dutch international is prepared to slash that demand by £60,000 a week.

It would still making him the second highest paid star at United – behind Wayne Rooney on £250,000 a week.

United offered Sneijder a contract last month and Inter were happy to sell at £35million but the Premier League champs could not agree on Sneijder’s pay.

The former Real Madrid star was sure they would come back with a new offer but that has not happened.