It has been reported that West Bromwich Albion captain Chris Brunt is battling to make their clash with Manchester United. 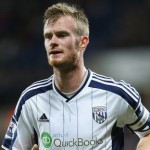 The Birmingham Mail revealed that Brunt is a fitness doubt for West Bromwich Albion’s match against Manchester United a week on Monday.

A groin injury ruled Brunt out of Northern Ireland’s European Championship qualifier against the Faroe Islands this evening and he is unlikely to be risked in Tuesday’s match against Greece. Premier League Transfers So Far – As At Wednesday, July 22