It has been reported that West Brom have snapped up Manchester United goalkeeper Anders Lindegaard. 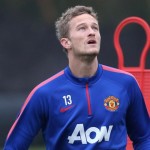 The Mirror says Tony Pulis has continued his signing spree by landing Lindegaard from Manchester United on a free.

Pulis has moved for Lindegaard after deciding the Dane represented better value than his No 1 goalkeeping target David Marshall at Cardiff.

Lindegaard has not featured under United boss Louis van Gaal and knew he needed to quit Old Trafford to resurrect his career.

He will be reunited with former United team-mate Jonny Evans who made the move down the M6 on Saturday.