Reports are out claiming that West Bromwich Albion are moving for Arsenal winger Serge Gnabry. 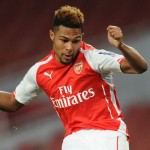 The Daily Star says a loan deal for German wide man Gnabry has already been discussed with Arsenal, while the Baggies have not given up hope of striking a deal for top target Matt Phillips despite talks with QPR having so far stalled.

QPR have rejected a £5m bid from the Baggies – but the Midlands club are adamant they will not meet Phillips’ £10m asking price.

Gnabry has also been linked with Crystal Palace. Walcott Confident Leicester Win Could Be Turning Point For Arsenal