Reports are out claiming that West Bromwich Albion are interested in Everton striker Steven Naismith. 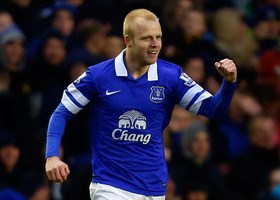 The Express & Star claims that the 27 year old Scotland international has emerged as a target for West Brom after they sold Shane Long to Hull City in January.

Should they stay up, Albion, which already have former Blues striker Victor Anichebe on their books, will move for the Scot. Man Utd Can Beat Everybody In This Form – Ander Herrera