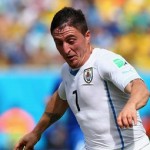 The People reported that the 28 year old Uruguay international, who joined Atletico from Porto two years ago, has been told he is no longer in boss Diego Simeone’s plans at the Vicente Calderon Stadium.

That has put new Baggies chief Alan Irvine, who is on the lookout for two new widemen, on red alert.

Sunderland have also been linked with Rodriguez this summer.